May-October €4.500/day June-September €5.500/day July-August €6.500/day Gulet terms. Included: hire of the yacht, crew, port fees in Turkish waters (private marinas not included), 4 hours/day fuel for main engines, fuel for generators. Not included: food, beverages, custom fees if any, navigation and port fees in Greek waters, tips for the crew. Full board €65/day/guest. Full board + soft drinks €75/day/guest. Full board + soft drinks + local alcoholics €100/day/guest. Charters usually have a weekly rotation, boarding at 5pm, disembarkation at 10am but there is some flexibility according with the booking plan and charter duration. Embark 5pm disembark 10am (*)If the boat will be allowed to charter in Greece (it depends of the relationships between the to countries) the embarkation and disembrkation must be in Turkish waters. Any change of guest is not allowed in Greek waters. Navigation fees are €200/day spent in greek waters (VAT on fuel due in Greece,detax in Turkey); custom fees include greek agency's fee; Greek port fees arecharged on each island the boat will touch, even if she's going to stay in a bay. Tepai Tax will be on the client’s side if the boat is entering for the firsttime, in the current month, in Greek waters. 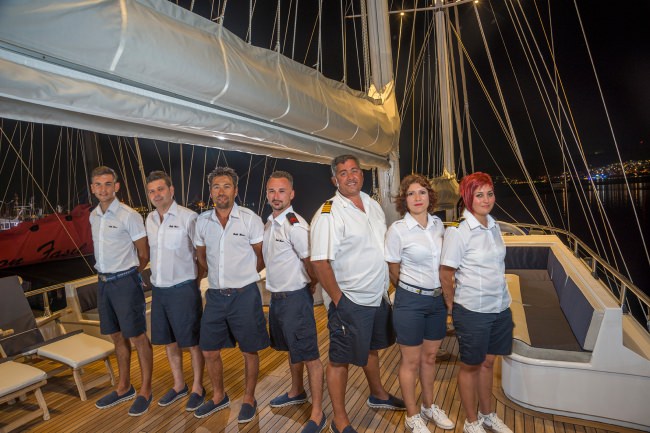 Crew Profile:
CAPTAIN Cemal YASAR
Turkey Nationality: Turkish Languages: Turkish, English.
2001 2008 / Yacht Amazon , 2008 2013 Yacht Peri , 2013 - 2014 Yacht Bella mare
Captain Area: Mediterranean, Aegean, Captain License: International license of a Chief Officer for cargo cruising ships, International yacht captain license.
Married,Hobbies: professional certified folklore dancer, diving, hunting Personal characteristics: client-oriented, stress-resistant, team player.
CHEF Unal KARA
Unal has been working as a chef since 2000 and had worked on Amazon for three years and five years on S/Y Kaya G. prior to joining Bellamare. He has spent a number of winters in Europe, honing his cookery skills and today offers a special selection of mouthwatering dishes from French, Italian, Turkish and Chinese cuisine. Unal is also avery definitely a sailing enthusiast. He is able to converse quite well in English, and such as, will happily discuss with the other guests the secrets of preparing traditional Turkish dishes.
ENGINEER Can SASMAZ
is a technical college graduate. He has been working as an engineer on yachts and merchant navy close to 12 years. He started his career as a oiler on one of the top class tankers and served as engineer for ten years, than he has moved to the motoryacht of the same companys owner. And he has joined the crew on 2012. As a jackof-all-trades, there is nothing that Berkan cannot repair.
CHIEF OFFICER Yasin KORKMAZ
Yasin is a keen yachtsman and started to improve himself on Catamaran Skye as his first boat on 2007 prior to joining of the team of our sistership S/Y Grande mare on 2008 and on 2013 he has joined the crew of S/Y Bella mare as chief officer.
He has studied in London for his English and graduated from Tourism High School and Tourism University in Turkey. He speaks fluent English and intermediate German. He holds Yachtmaster certificate, GMDSS GOC and Cmas Diver Licence.
SAILOR C&#305;nar AK
The Freshman. C&#305;nar is although only having completed his 4th season on yachts a real asset. Always there to help, assist and serve. His love for the sea and passion for looking after his guests grows by the minute and he is also the assistant engineer of S/Y Bella mare.
As sailor, he is happy to display his woodworking and painting skills and his position includes keeping S/Y Bella mare looking polished and ship-shape. C&#305;nars interests include swimming and hiking.
STEWARDESS Semra GULER
Yasemin has joined the crew of S /Y Zelda in 2012 and she has moved to S/Y Bella mare with the rest of the crew in 2013. Prior to this she had worked as chief receptionist in a private company. She is delighted to have set sail on what she regards to be more challenging and adventureous life on the sea. Semra speaks fair English and her friendly energetic demeanour contributes volumes to the warmth and congeniality of the atmosphere aboard S/Y Bella mare
CHIEF STEWARDESS Yasemin SAKA
She was born in Istanbul and worked in the hotel industry for five years and she is now searching for more adventure for her life and decided to join to the crew of S/Y Bella mare. She is the newest crew and so much excited for the season and would love to make your experience onboard an unforgettable one.
She speaks fluent English and has a very well knowledge about serving and tastes of vines. 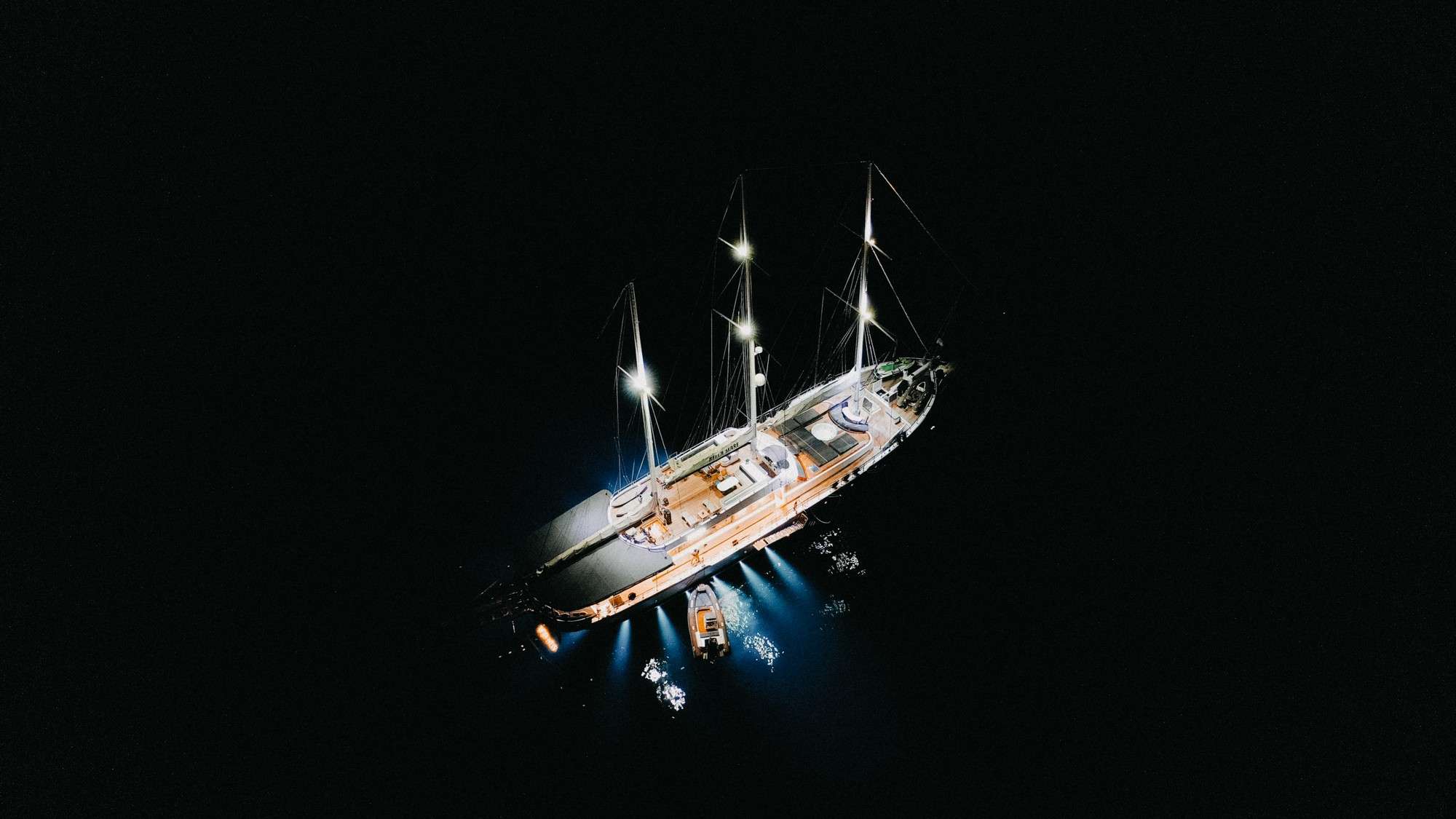 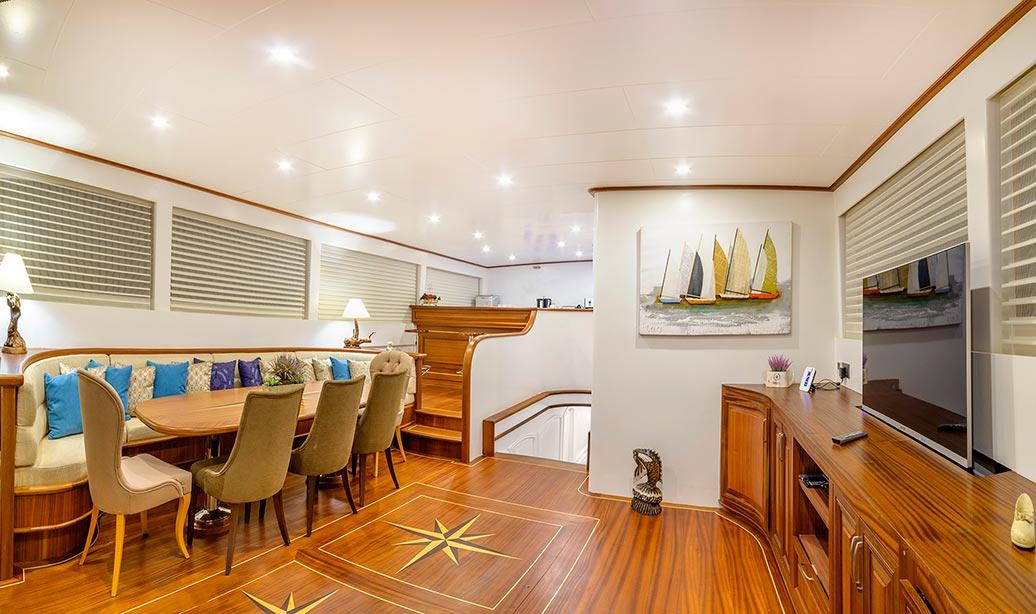 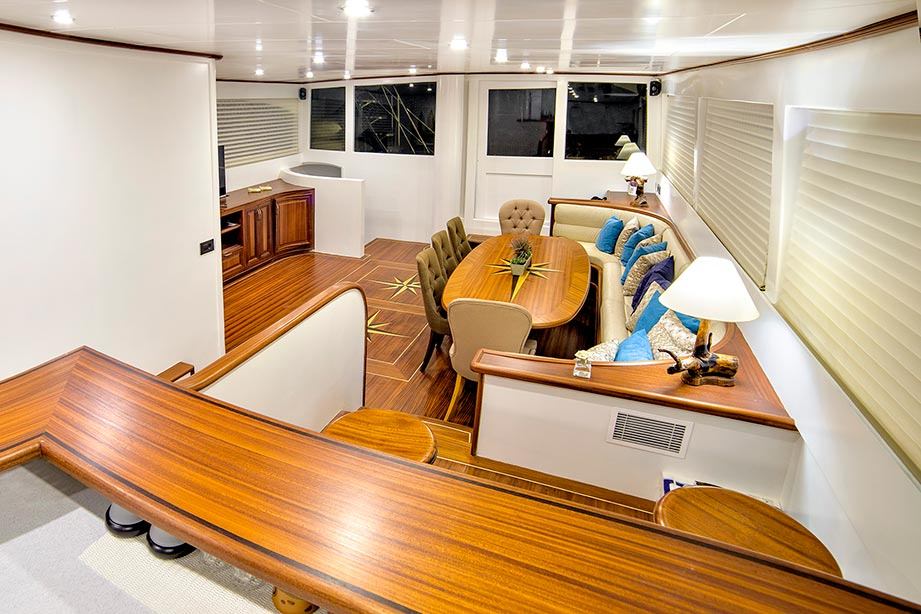 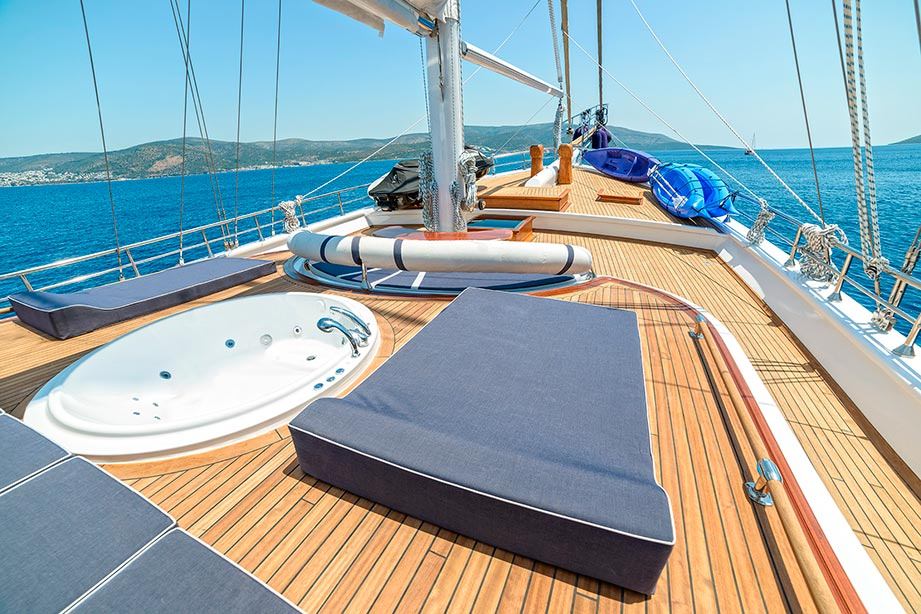 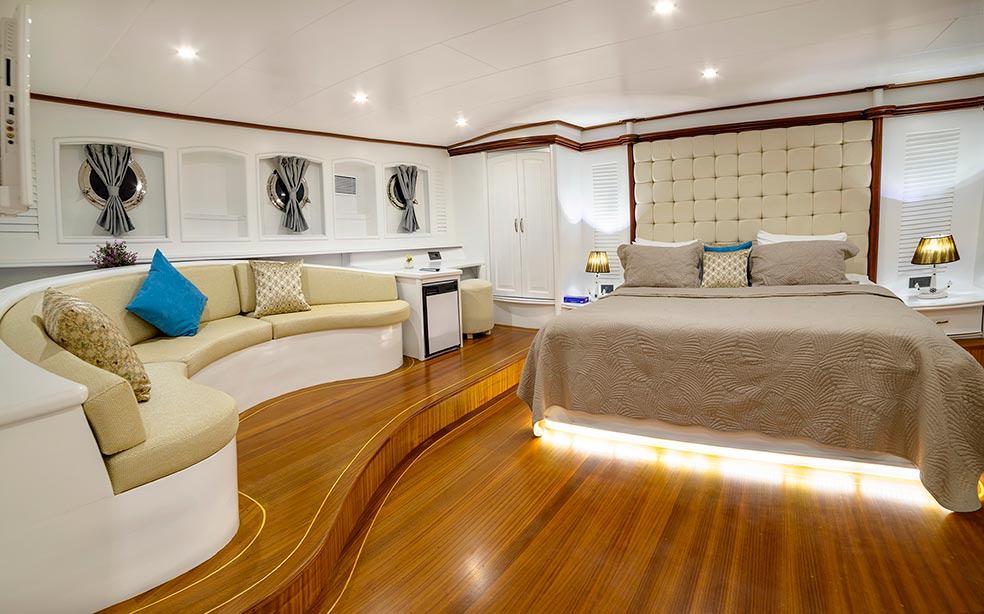 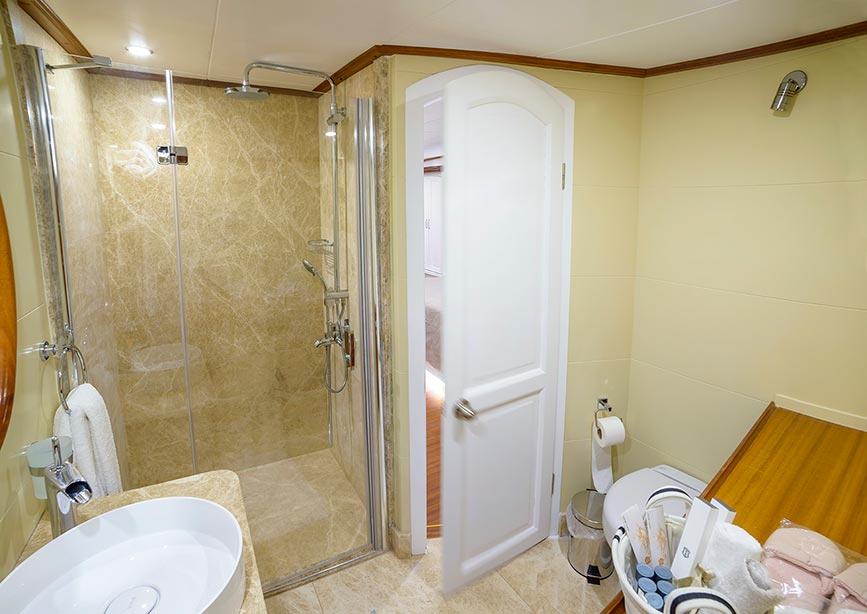 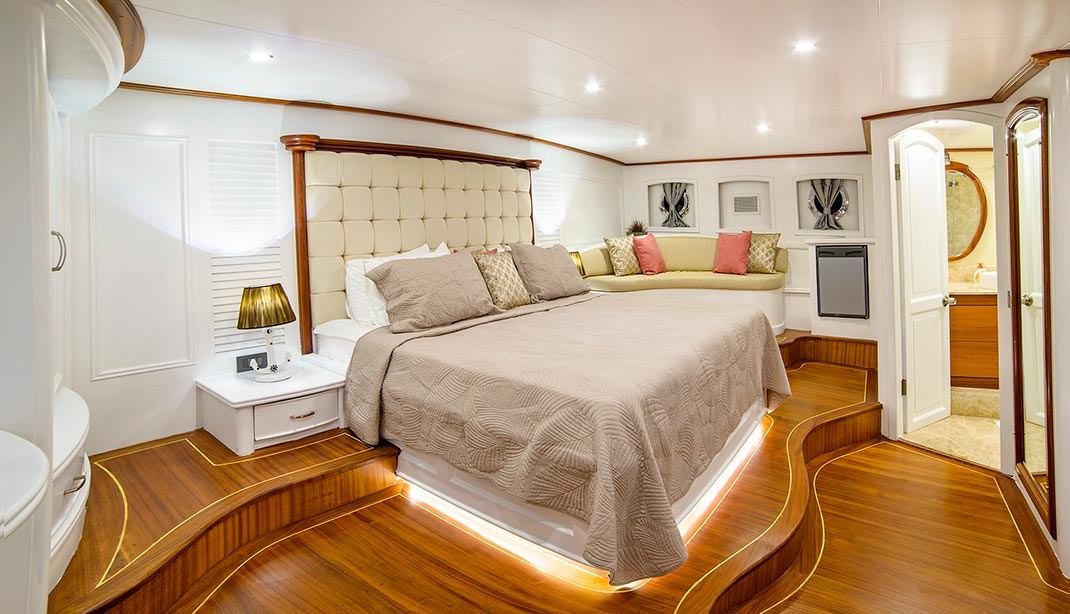 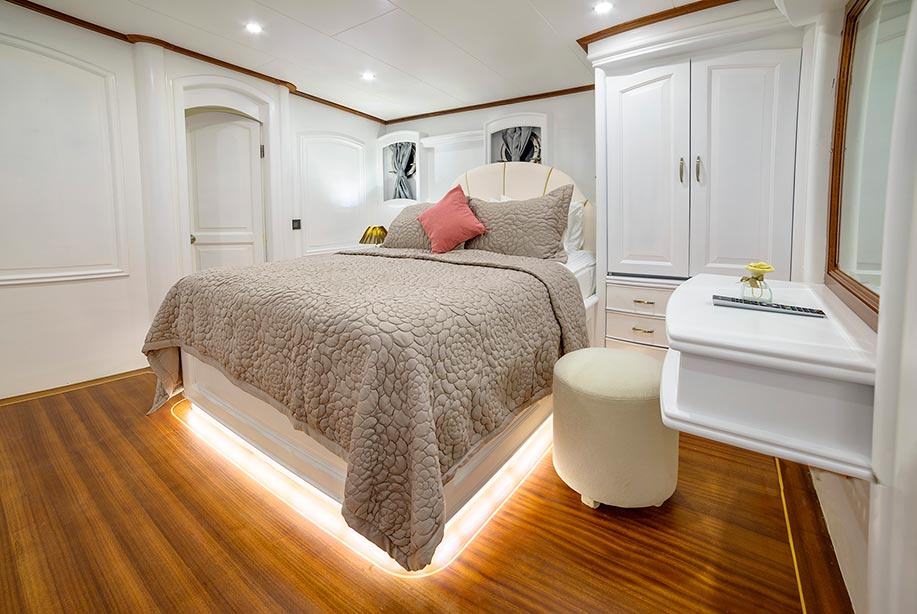